I am Dr. Khammar Mrabit, Director General of the newly created Moroccan Agency for Nuclear and Radiological Safety and Security (AMSSNuR). I grew up in Morocco and studied in France where I obtained my PhD in Nuclear Physics from the University of Strasbourg (France), and my Engineering Diploma from the National Institute of Science and Nuclear Techniques (INESTEN), Saclay (France). I worked in France, Morocco and Austria and carried out over 550 missions worldwide.

Of Which in Africa

I Made It This Far

My studies and passion for energy and nuclear physics made me start my career at the French national utility company Electricité de France (EdF) before moving back to my home country and working for the National Office of Electricity of Morocco (ONE) and the Ministry of Energy and Mines. I then had the chance to take part in the International Atomic Energy Agency (IAEA) internship program that led to a professional position in 1987. From 1987 until 2016, I was involved in technical cooperation, nuclear safety, nuclear security and nuclear safeguards. I spent nearly 30 years at the IAEA where I held the position of Director of Nuclear Security worldwide from 2011 until 2016. During my tenure with the IAEA, I had the pleasure to serve and cooperate with, among others, all African country members of the IAEA. The international experience I gained was essential for my nomination by His Majesty the King Mohammed VI as the first DG of AMSSNuR.

I was responsible for the IAEA International Model Project on upgrading radiation protection infrastructure, an unprecedented international co-operative effort to improve radiation and waste safety infrastructures in nearly 100 countries, including many African member states. Through this project, national bodies regulating safety and security of nuclear and radiological applications were established, strengthened and maintained.

Use of ionizing radiation will increase in the medical, industrial, agricultural and research areas in Africa. For example, in the medical field, more diagnosis and therapeutic procedures will be used to fight cancer and other diseases. Ionizing radiation has proven to be crucial in fighting cancer. Worldwide, more than 40% of cured cancers resulted from the use of ionizing radiation. Today, all African countries use ionized radiation for diagnosis and treatments. In the Kingdom of Morocco, there are more than 23 nuclear medicine centers and radiotherapy departments. Between October 2016 and August 2018, over 1,620 authorizations to use ionizing radiation have been granted in Morocco, two-thirds of which were for medical practices only. This trend is not unique to Morocco and could be generalized in most African countries. AMSSNuR has a strategic plan for the 2017-2021 period where one of the main objectives is to further strengthen its cooperation with sister organizations across Africa.

I wish to share my experience and lessons learnt in establishing a regulatory body that regulates, inspects and enforces all practices involving ionizing radiation. Such experience is based on international conventions and international standards and best practices in nuclear and radiological safety and security that could be transposed to many other sectors.

I expect the Club to become an effective platform to further facilitate the sharing of my experience in different fields that would result in identifying and applying best practices in Africa with a view to strengthening sustainable development in medicine, industry, agriculture, etc. 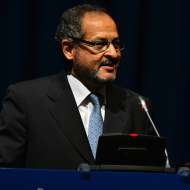 END_OF_DOCUMENT_TOKEN_TO_BE_REPLACED

close
close
Start typing to see posts you are looking for.